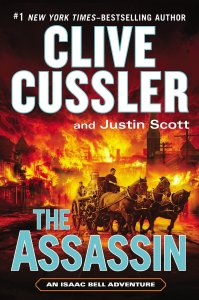 The Good: It’s hard to find a good thing about an assassin, but this one is fairly likeable, as assassins go, but bad enough to want him dead. As for the book, it is far and away the best of the Isaac Bell Series, highly recommended!

Part of the reason I enjoyed it so much is that a portion of the story takes place in the country of Georgia, where I spent a few weeks one summer. The author’s description of the area and the people of Georgia, Russia, Azerbaijan, and Armenia were much as I remember. Some good research was done here – great fun to read.

The Bad: There is WAY less bad in this book then in the previous ones. Normally I have to skip over the descriptions of the perfect main characters, their perfect hair, food, and dress. Gag me. In this Isaac Bell adventure, most of that was missing.

The Ugly: A great twist or two at the end, but it felt ugly not to have guessed what was coming before the authors pulled the trigger. Foolish is more accurate, but Clint Eastwood used Ugly. I loved this book. It’s way better the previous ones in the series – well done Clive and Justin!

Surprise #1: I left for Haiti Sunday night without the church knowing. I arrived here around 4pm Monday and did some upkeep around the place. Tuesday was the same, Wednesday I was able to work on my favorite Isuzu Trooper. Thursday at 9am was terrific.

I was able to shock most of the 14 people coming in from Cottonwood Church by meeting them at the airport. Great fun! It may have been more of a shock riding with me from the airport to Maranatha Ministries without brakes.

Surprise #2: The Missionaries stole my luggage. At the Florida airport i was asked if i wanted to check my luggage. Since I had 35lbs in my carry on and the flight to Port-au-Prince was packed, I did it. That gave me 2 50lb bags and my 35lb bag checked in the belly of the plane. When I arrived in Haiti there was the typical customs line up so it took me a while to get to the baggage claim. Not that I needed to hurry.

My bags weren’t there.

My life was in my carry-on. And it wasn’t there. I could have kicked myself for letting them check the bag. I went to the pile of bags that in this airport generally gets dumped to the side after they make a few rounds. Thankfully I put red duct tape around the handles to make them easy to find. I saw one bag with red tape. “My carry-on!” I prayed.

But it was one of my bags. One down, two to go.

I started looking around, watching people leaving the area, looking for red duct tape. There was a missions group with the obnoxious matching t-shirts loading a bunch of bags onto carts. One of the bags they were about to load had… red duck tape!

I ran over and snagged it. “Oh, sorry” said the leader.

That wasn’t adequate. So, I started looking through bags already on the closest cart. There was my carry-on, loaded and ready to go with a bunch of matching t-shirt missionaries. I snagged it. “I looked like ours,” said the leader. “Why” I wanted to ask, “because it was black?” Ugh. Anyhow I finally got all my stuff and headed out to beautiful Port-au-Prince.

Surprise #3: The Trooper Lives! Well, it lived for a day. The 1998 Trooper with endless miles that had been sitting for 4-5 months ran after a day of work. A friend and I got it to the gas station, where it died. I had my first experience of pushing a car down a packed street with motorcycles and cars squeezing and honking around me. Great fun. Wish I had a video.

We then got it running long enough to go to the airport and back. Currently it is waiting for brake parts. It was a rather hairy airport ride. We now know 3 of the 4 disk brakes were frozen.

That’s it for now. Off to work on a Trooper and enjoy some Cottonwood folks crazy enough to come out here. What an amazing church! 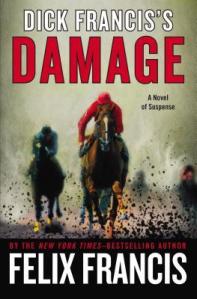 The Good: A great read, easily one of the best by Dick or Felix Francis. Lots of fun horse and horse racing facts mixed in what a good thriller.

The Bad: It seemed to end too quickly – abrupt really. Maybe that just shows I liked it a lot and didn’t want it to end? Nah, lousy author.

The Ugly: It took some research to figure out this one was written by Felix, the forth since his dad Dick’s death. Sad to see him have to write alone, pretty cool to see the son pick up where his dad left off.

The Good: Unlike the rest of the reading world, I’m new to Reacher. I hear the books improve the more you read. Not that you could prove that by this one.

The Bad: A few things here – #3 SPOILER ALERT! Skip it if you need to as it gives something away.
1 – The story took a long time to get going.
2 – Reacher seemed more like a lucky creep than a cool, wise, good-guy.
3 – In the end, it reminded me of the old Saturday Morning Cartoons – unbelievable. Muscles that stop bullets? Gag me.

The Ugly: Three books into the series and I’m done with Reacher. I know the books are supposed to improve, but this one isn’t nearly as good as the first two, and I just can’t get behind a cradle-steeling, bullet-stopping-pectoral-muscle creep saving the day. I miss underdog.

“Dear God, why did you give me cancer?” asked Kristina, daughter of a long-time friend of Pastor and author Dan Cooley.

Dan recalls, “In the summer of 2013, Kristina wrote me a note with that question. I tried to give an answer in Bizarre Bible Stories 2!, but fell short. One day I’ll see her again, and she can show me her mansion and introduce me to Jesus who will answer the question with depth.”  Kristina went to heaven June 21, 2014.  The new book is dedicated to her.

It was totally my fault, as I hit a fairly stationary curb.

NO – this isn’t a picture of my wreck. I put this one in so that the owner of the Ford I did wreck would maybe think, “Hey, at least it wasn’t that bad.”

Today HAD to be perfect. It was our first day bringing kids to Glorieta Camp for our first year. I was chosen to drive someone else’s car – as it sat more kids – to help bring the kids to camp.

I was on my way to the office to pick the kids up, adjusting the mirrors, the seat, the radio, getting use to things.

Somehow, I’ve no idea how, the curb jumped out of the right hand lane and hit the front passenger’s side tire.

Ugh! I felt sick. I figured it must have blown the tire, as the steering wheel went weird. It would be embarrassing to call and let everyone know why I was going to be late, so I was hoping to jump out and change the tire ASAP. I’d have to buy a tire and talk to the owners later, but that was doable. Unfortunately, it was worse than I thought.

When I tried to get off to the side of the road the Ford Explorer wouldn’t move.

I got out. The tire looked fine.

All I knew was that things must be worse than I thought.

Upon looking closer yet, I saw that the axle had popped out of the transmission. Double Ugh. I asked myself, “myself” I asked, How could the axle fall out from hitting a curb?”

It was worse than I thought.

The lower control arm had broken. If you don’t know what that is, it’s bad. But it was about to get worse.

I had to call Sue, our Children’s Director and let her know that the kids waiting for me weren’t getting their ride. She wanted to know why. I wanted to answer. “You see Sue, there was this semi that ran me off the road into a curb.” I so wanted to lie. Thankfully, Sue had an emergency list of other drivers and cars. Go Sue! But for me it was only going to get worse.

I was hopelessly stuck in the middle lane, with speeding cars on Southern Blvd weaving around me. A passer-by called the cops to help direct traffic. I called AAA. No one hit me. But I had another call to make. To the owner of the car.

Clay the owner was more understanding than I might have been, and it was great to have that call behind me. But, I still had an hour to wait for the wrecker. Plenty of time for things to get worse.

When you do something exceedingly stupid, wouldn’t you like to do it in solitude? Southern Blvd is not a street of solitude.

Enough neighbors and church folks either saw me and/or stopped to try to help that I figured I’d better get this out there. People are starting to call. Ugh.

I’m not sure what was hurt more. The Ford or my pride.

Sure hope this doesn’t get worse.