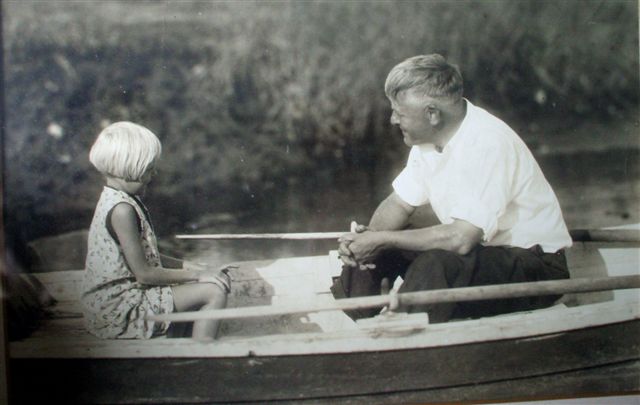 My mom was born Dec. 12, 1922 in Bridgeport, Connecticut. Last week at church we talked about what Ecclesiastes calls “crooked days.” It’s Solomon’s way of talking about hard, suffering, difficult bad days, and my mom had a few of those. She was the youngest of seven kids, and the light in her dads eyes. The picture is one of my favorites – of mom and her dad. He died when she was 12, and my grandmother decided my mom was too young to go to the funeral. Grandma sent her to school that day instead. A crooked day.

Upon graduation, my mother left home, and got on a train for Chicago where she enrolled in Moody Bible Institute. She met my dad there, who soon after became a solder in WWII. Another crooked time.

Mom graduated from Moody in 1945, and married my dad just after the war in ’46. They were missionaries in France from 1953-’56, mostly in Dijon. While there my dad got severe Pneumonia, and the doctors said he needed to have a lung removed to save his life, but they did not have the facilities in France at the time. My parents would have to return to America. The mission board sent the plane ticket, but mom didn’t have the money for a train ticket for her, dad, and their four kids to get from Dijon to Paris. There was no internet. Money took time to travel.

Finally, the flight was just one day away. When mom picked up the mail, she had a letter from one of her sisters, who had promised to support them when they were in France, the same sister who introduced mom to Jesus. However, she had not given anything for the last three years. Feeling guilty a month before, she wrote a check for the three years giving she had held back and sent it all at once. That day, the day before mom and family had to leave; the check arrived in the mail. This money that probably would have been spent, rather than saved, had her sister sent it in on time.

Only the bank wouldn’t cash it. Yet another crooked day.

As an out of country check, it would take weeks or more to clear. Mom, with kids in tow, walked home and prayed.

God gave her an idea.

She ran with kids back to the bank just before it closed and asked them, “Would you please call the American Embassy in Paris, to see if they will back the check?”

Years later I remember my brother, ten years older than me, going AWOL from Christianity upon leaving home after High School. They were hard times for my parents, especially mom.

Mom prayed and waited. Every night, every devotion, I heard my parents pray for all their kids, but especially for Dave.

David came back to Christ some years later, just before I left home after High School. But for all those years I heard lots of praying, saw lots of waiting, and it affected me. David came back.

When JoLynn, our four kids, and I moved to Winnipeg in 1998, someone from the church in Winnipeg had secured a rental for us. I’m sure their intentions were good; but… mercy.

It was a cool old house in a nice neighborhood, and would have been great for a newlywed couple.

The floor slanted over a foot from the NW corner to the SE. You couldn’t use a desk chair with wheels without blocking it in place. Pencils rolled off tables. Cabinet doors hung open. It was 1600 sq ft on 3 different floors, so it seemed to be 1000 sq ft of stairs and 600 ft of living space. The good thing was it had a basement to store our extra stuff – which worked well until the sewage backed up. I suppose the worse part of it all however was the landlady. Words fail me.

We moved in October 2. My mom came from Arizona to visit in November. She said, “Danny, you can’t live in this place!”

Mom prayed. That was Friday. She flew back to Arizona on Saturday.

We waited. I believe it was Monday when our landlady called to say she had filed for bankruptcy and we had to vacate the house.

I could go on of course, but you get the point.

Happy Mothers Day. I’m sure grateful for mine, and that my kids got a mom much like her.