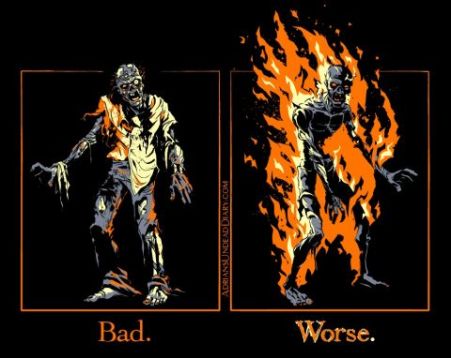 Another draft chapter from Bible Zombies. Any help appreciated…

Could Joel 2 be a description of the coming Zombie Apocalypse?  Some on the normally infallible interweb believe so. Here is what Joel wrote over 2500 years ago, in a prophecy about the future.

Joel 2:1 (NLT)  Sound the alarm in Jerusalem! Raise the battle cry on my holy mountain! Let everyone tremble in fear because the day of the LORD is upon us. 2  It is a day of darkness and gloom, a day of thick clouds and deep blackness. Suddenly, like dawn spreading across the mountains, a great and mighty army appears. Nothing like it has been seen before or will ever be seen again. 3  Fire burns in front of them, and flames follow after them. Ahead of them the land lies as beautiful as the Garden of Eden. Behind them is nothing but desolation; not one thing escapes. 4  They look like horses; they charge forward like war horses. 5  Look at them as they leap along the mountaintops. Listen to the noise they make—like the rumbling of chariots, like the roar of fire sweeping across a field of stubble, or like a mighty army moving into battle. 6  Fear grips all the people; every face grows pale with terror. 7  The attackers march like warriors and scale city walls like soldiers. Straight forward they march, never breaking rank. 8  They never jostle each other; each moves in exactly the right position. They break through defenses without missing a step. 9  They swarm over the city and run along its walls. They enter all the houses, climbing like thieves through the windows.

The positives: These possible zombies come in a day of gloom and darkness. They cause desolation wherever they go. The rumble instead of speak, and cause people to go pail with terror. They come in a swarm, climbing in windows, leaving not much besides ash in their wake. I like that.

Any respectable zombie sleeps in the dark places during the day – and then swarms about looking for victims at night. In the movies they never really speak, and yet seem to win their wars through numbers and relentless pursuit of their victims, just like this story in Joel. Could Joel be looking 2500 years into the future, to zombies in our time?

The negatives: They look like horses. Not green slobbering staggering horses, but like horses. They also march like warriors, never breaking rank or jostling each other. A good zombie staggers at best.

Nah. We will find a zombie or two in the Bible, but not here.

The rest of the passage even goes on to say. . .  10  The earth quakes as they advance, and the heavens tremble. The sun and moon grow dark, and the stars no longer shine. 11  The LORD is at the head of the column. He leads them with a shout. This is his mighty army, and they follow his orders. The day of the LORD is an awesome, terrible thing. Who can possibly survive?

Some think this passage is describing the advance of Assyria against Israel, others of the return of Jesus to claim His earth, I’m sure others have other guesses.It’s hard for me not to see it as God’s army, as He is leading it. I just figure He has a good reason for taking Jerusalem back over and using His army to do it.

I think I’ll simply start working on the Zombie Hoard in Ezekiel 37. A bit more promise there, as these folks were definitely dead before they staggered back to life. Dead is good.